Rick Olson Secrets, Secrets, Secrets…in my opinion, Letteny’s continuing oversight approving the pattern and practices of Racine City Governing is the main problem effecting the OPEN governing process in Racine. Take Machinery Row, for example, Letteney knew it was a public sale. Letteney knew the public loan included an undisclosed escrow to refund Blackwell his project expenses. Letteney knew a secret escrow allowed public misrepresentation that Blackwell was paying property taxes when actually the LOAN FUNDED THE TAXES. In my opinion, Dickert and Friedel effectively hired Blackwell as a strawman to act as the buyer only to secure the $9 million in tax credits. Letteney knew and his over site completely disregarded Wisc Ch 32, Wis Admin 92, 42 USC, URA devastating the future of all the tenants and businesses previously operating in Machinery Row. Letteney orchestrated a city loan to Blackwell without any down payment or additional collateral but secretly held a title in lieu agreement that was not disclosed to the public when the loan was made. OPEN RECORDS! THE PUBLIC NEEDS A FORENSIC AUDIT OF ALL EMAILS INVOLVING LETTENEY’S HIDDEN SECRETS TO EXPOSE THE HIDDEN PATTERNS AND PRACTICES FACILITATING CORRUPTION. An ethical city attorney’s office would only advise following Wisconsin and Federal Law and open governing would not make the city council vote on blind issues where secrets are involved. Today, there are several Civil Court filings seeking to cure the injustices at Machinery Row. These cases would not exist under fair and open government. Heck, with IMPROVED ETHICS and openness in government (elections) maybe Sandy Wiedner would even be the mayor of Racine. Perhaps it will take the unearthing of the Criminal Complaint # 17-00217 filed with Racine County Sheriff’s office by Dennis Monety on April 2, 2017 to cleanse politics in Racine. 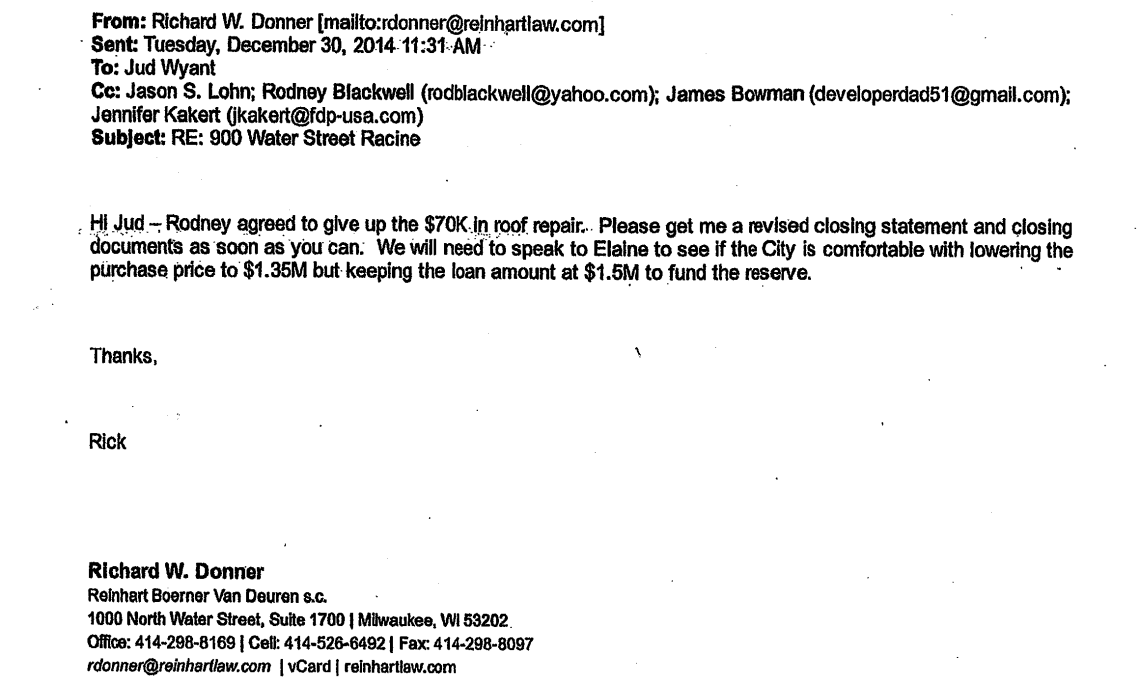